The background to Wags Lyrical 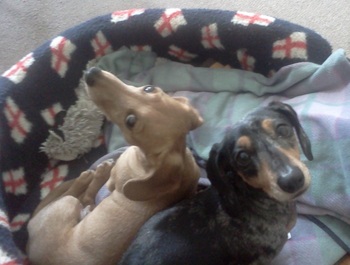 Chilli and Silva in their half-price England bed*
My first rescue dog in my adult life found me when I was living in Austin, Texas, back in 1994. Well, we found each other really - I found Hannah, a four-month-old staffie cross, sitting in a cage at the Round Rock Humane Society, when I was actually on a quest to find a beagle to rescue. And she found me at a time when I was quite low, became my canine soulmate, and came back with me to the UK when I moved back in 1999, together with Molly the mini dachshund who I'd found wandering the streets of Austin in a pitifully emaciated condition in 1998.

I was devastated when they went - Hannah in 2004 and Molly in 2008,  and I lasted ten months in my resolve not to get another dog. All I could think of was the heartache having a pet brings at the end, forgetting all the joy they bring before that. But then I found myself scanning dog rescue sites and driving out to local animal shelters, feeling that there was an empty hole in my life in need of filling... And sure enough, that's when Silva found me! Needing to be rescued from a breeder who had treated her purely as a money-making machine, this two-year-old silver dapple mini had never been socialised, and was no longer wanted by the callous breeder. She bonded with me immediately, and we were both delighted for it to be just the two of us until, in December 2013, she was badly attacked by a large dog that was off the lead and pounced on her, shaking her neck and tearing a muscle that led to very severe blood loss and nearly the loss of her life. I had a chilling sense then of how fragile life is, and just at the same time, a friend who rescues puppy farm dogs in Wales heard of another mini dachshund who had been rescued from one of those vile breeding establishments and needed a forever home. So Chilli, a golden tan lovely natured girl, bounced into our lives just before Christmas, and she and Silva instantly became fast friends.

My lovely rescue dogs and my music have been such a major part of my life that I had the idea of combining my two passions and offering my services as a singer-songwriter to any pet owner wanting a lasting musical memento of their best friend - dog, cat, parrot, stick insect... you name it! - or as a gift for animal-loving friends and family.

And that's the story of how Wags Lyrical came to be!

*Being knocked out of the World Cup at an early stage does have its advantages after all! :)